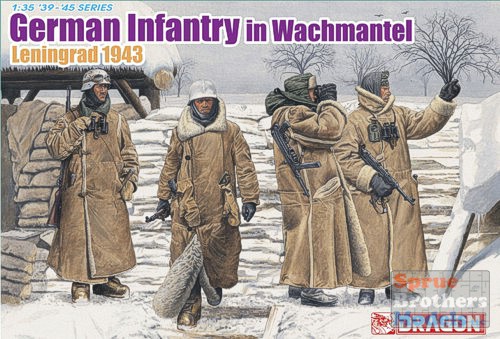 The seizure of the northern Russian city of Leningrad (now Saint Petersburg) seemed to be a foregone conclusion for the German military. They even prematurely printed invitations to their victory celebration in one of the city's hotels. However, the Siege of Leningrad, which began on 9 September 1941, was finally broken 872 days later on 27 January 1944. The Germans were never able to capture the city, which held out thanks to a supply route via Lake Lagoda, a tenuous water connection that froze in winter to form a land bridge. This vital route was known as the Road of Life. The Siege of Leningrad was the most destructive blockade of a modern city, indeed one of the worst in world history, and caused the deaths of up to 1,500,000 soldiers and civilians from combat and unparalleled famine. Dragon's latest 1/35 scale figure set depicts German sentries maintaining the siege of Leningrad. It shows a changing of sentry guard in the depths of winter. To shield themselves against the bitter and penetrating cold, these German soldiers wear thick sheepskin overcoats, albeit with slight variations of uniform. The footwear of the sentries also varies, with cold-weather overboots, snow boots and even Valenki boots in evidence. Valenki boots, made from felt and thick wool, are a traditional form of shoe worn in Russia. The soldiers are sharply molded in plastic, and they are produced in lifelike poses. They also wield different weapons appropriate for their task. These extremely refined figures lend themselves to a diorama or vignette of a dugout or sentry post in the chill of winter. On the other hand, they are versatile enough to be fitted into any scene the figure modeler can imagine!