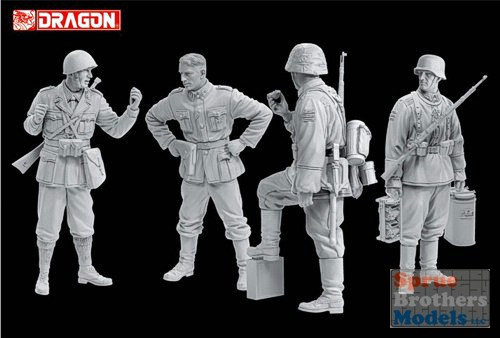 After Italy ventured into Albania in 1939, Mussolini decided to invade Greece on 28 October 1940. The Italian armed forces found it hard going, and in fact, it required the intervention of German forces attacking via Yugoslavia to finally capture the region. Yugoslavia and Greece were divided into sectors, with Italian, German, Bulgarian and Rumanian forces policing these occupied territories against determined partisan resistance.

Italy occupied two-thirds of Greece (including its islands), Albania and the Yugoslav coast. Although they were supposed to be allies, there was often tension in the relationship between Germany and Italy. After Benito Mussolini was ousted in July 1943, the country signed a secret armistice on 3 September, bringing Italy's combat involvement in WWII to an end. German forces in Italy and the Balkans moved quickly to disarm their former allies and to take up critical defensive positions, with significant violence taking place in some garrisons.

Dragon's newest 1/35 scale figure set depicts four soldiers set against this historical backdrop of 1943. There are three German soldiers and a lone Italian, and their relationship appears rather strained, hence the set's title of 'Fragile Alliance'. The Italian is gesticulating as he argues a point with an unconvinced German. The soldiers are finely molded with crisp details and realistic features. They are wearing uniforms and carry weapons appropriate for this period of the war just before German-Italian relationships turned completely sour. There are two brand new accessories in this set too - the oil can that one soldier is using as a footrest, and a food container in the hand of another soldier. While the set doesn't promote bilateral relationships, it does provide modelers with some useful figures from Germany and Italy! Furthermore, model-makers can use this set to create a scene of their own imagination.