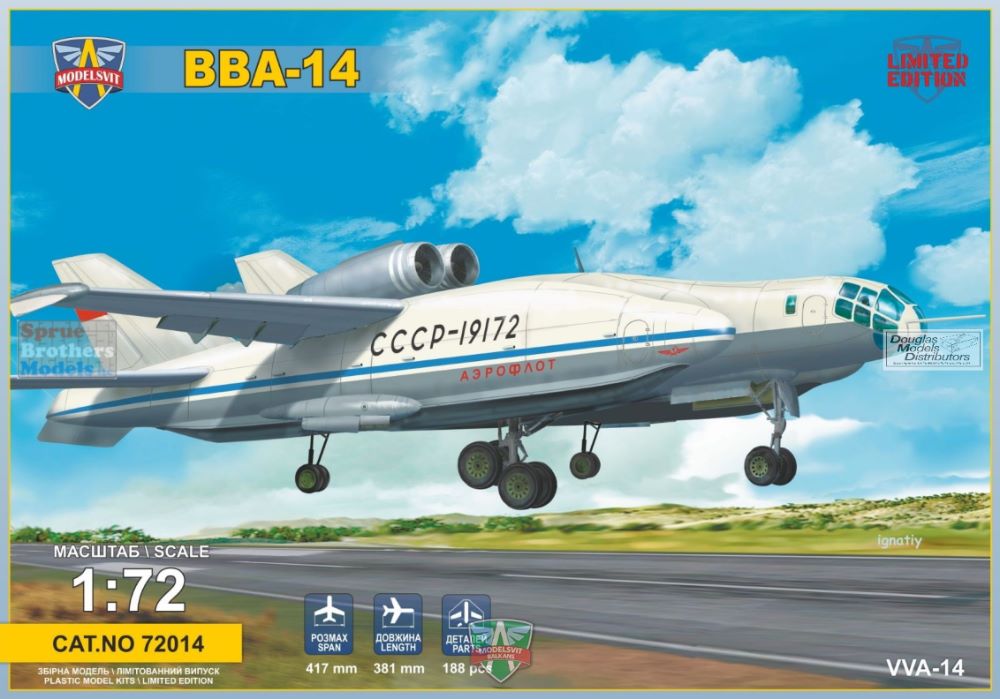 The Bartini Beriev VVA-14 Vertikaľno-Vzletayushchaya Amfibiya (vertical take-off amphibious aircraft) was a wing-in-ground-effect aircraft developed in the Soviet Union during the early 1970s.[1] Designed to be able to take off from the water and fly at high speed over long distances, it was to make true flights at high altitude, but also have the capability of flying efficiently just above the sea surface, using aerodynamic ground effect. The VVA-14 was designed by Italian-born designer Robert Bartini in answer to a perceived requirement to destroy United States Navy Polaris missile submarines. The final aircraft was retired in 1987.

MSRP: $51.00
Our Price: Sale: $43.49
Regular:
The Tupolev Tu-91(NATO reporting name:Boot) was a prototype of Soviet naval attack aircraft, designed in the early 1950s.The turboprop bomber was capable to takeoff and to land on unpaved airfields...

MSRP: $60.00
Our Price: Sale: $53.99
Regular:
By Nick Williams The radical tailless F4D Skyray built by Douglas in the early 1950s was the product of flying wing research work originally done by Jack Northrop and Germany's Alexander Lippisch of...

MSRP:
Our Price: Sale: $11.99
Regular:
The decal set of the M18 Hellcat. Reproduced unique squad marking of The US 3rd ARMY. Included decals for major sign of interior The decal configuration that can reproduce the M18 TD during WWII...

MSRP:
Our Price: Sale: $11.99
Regular:
The decal set of the M18 Hellcat. Reproduced unique squad marking of The 3rd ARMY. Included decals for major sign of interior. The decal configuration that can reproduce the M18 TD during WWII for...

MSRP:
Our Price: Sale: $73.99
Regular:
Although the SAR (Search and Rescue) flying boat Beriev Be-14 successfully passed its government tests in 1965, it has never been put under serial production. Meanwhile, the USSR maritime aviation...

MSRP:
Our Price: Sale: $749.99
Regular:
The An-225 “Mriya” was designed in Ukrainian SSR for the needs of Soviet space program. In 80’s of XX century, Soviet Union finalized its work on "Buran" shuttle and had a...

MSRP:
Our Price: Sale: $73.99
Regular:
The Be-12 "Chayka"( in English �??Seagull�?�) was an anti-submarine amphibious aircraft, successor to the obsolescent Be-6. The turboprop plane entered service in the Soviet Navy on 29th November...