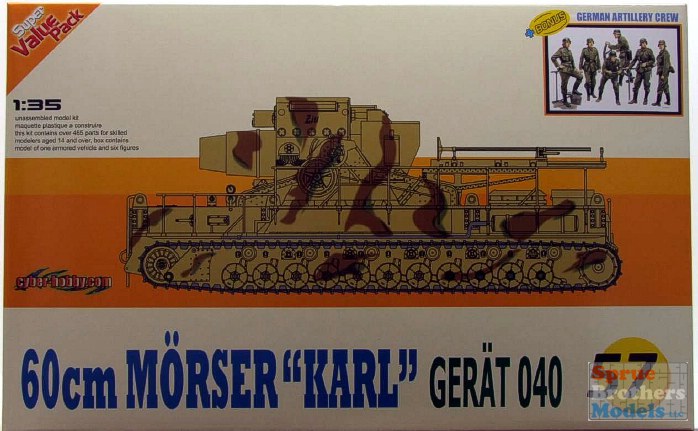 Cyber-Hobby has come up with a monstrous combination for its latest release, a 1/35 scale kit of the German 60cm M??rser. The 11.37 long monster was known as the Ger??t 040 when the original 60cm-diameter short-barreled mortar was fitted. (Three were later modified with a 54cm mortar in an effort to increase the range.) This kit allows modelers to make any of the six Ger??t 040 weapons, which were engaged in such operations as the invasion of the Soviet Union, the battle for Sevastopol and the Warsaw Uprising.

This impressive set also includes six German soldiers that are specially designed to fit this M??rser. Each character, going about his business around the artillery piece, is sharply molded. This giant 1/35 scale kit of the Karl Ger??t 040 mortar comes with two complete chassis. This allows modelers to choose whether to show the mortar in firing mode or in transport mode, since the chassis would be lowered for firing. Furthermore, this set has a pricing point that modelers will find extremely economical. It may well be monstrous in size but its price certainly isn�??t!

MSRP: $60.00
Our Price: Sale: $50.99
Regular:
Academy revamped its Warrior with newly added tooling, bringing this kit to a new level of realism. An entire sprue of over 80 detailed parts will put this kit on modelers want list. Comes with...

MSRP: $60.00
Our Price: Sale: $50.99
Regular:
Academy brings this kit to a new level of realism by including decals and instruction for both US Army & US Marine (C Company, 1st Tank Battalion) construction. This authentic and highly accurate...