DAS8257 Detail & Scale Books - Jet Fighters of the US Navy and Marine Corps Part 2: Mach 1 and Beyond

MSRP:
Our Price: Sale: $21.99
Regular:
— You save
Frequently bought together: 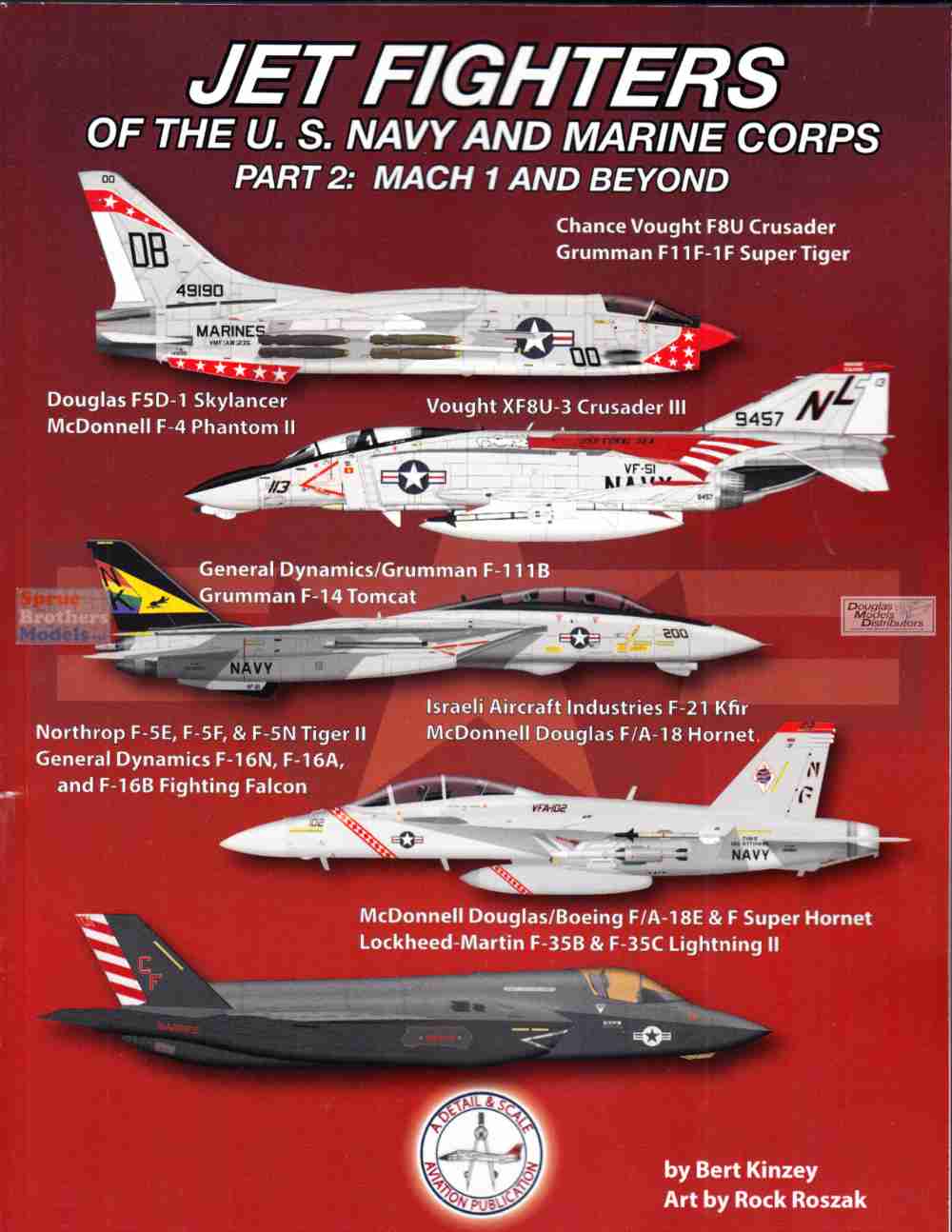 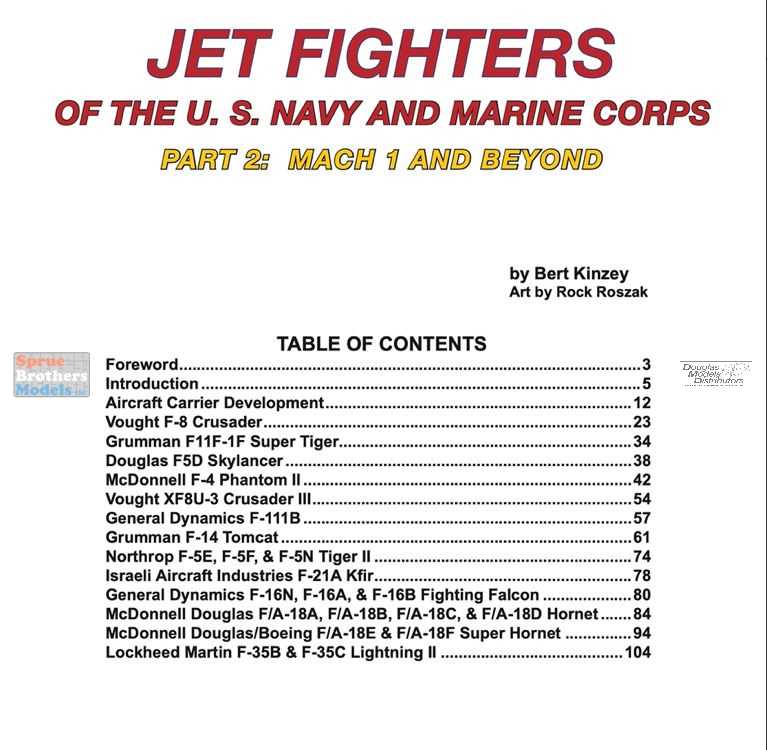 Jet Fighters of the U. S. Navy and Marine Corps is a two-book series that describes the entire history of American Naval jet fighters, from the very beginning when many thought that the onset of military jets would mean the end of naval carrier-based aviation, to today when the fifth-generation stealth jet F-35B/C Lightning II has begun its service with both the Navy and Marine Corps. Both volumes cover every jet fighter that has ever been produced for the Navy and the Marine Corps, and not only those that were used operationally, but even the aircraft that only made it to the flying prototype stage are included. Also covered by the books is the history of how American aircraft carriers evolved from the ESSEX class ships that won World War II with propeller-driven aircraft to the mighty supercarriers of today.

In the first book, Jet Fighters of the U. S. Navy and Marine Corps, Part 1: The First Ten Years, author Bert Kinzey described the first and second generation jet fighters that came on the scene at the end of or shortly after World War II. These jet fighters made their first flights between 1945 and 1954, and the book covers fifteen aircraft arranged according to the chronological order of the date of their first flight.

This concluding volume, Jet Fighters of the U. S. Navy and Marine Corps, Part 2: Mach 1 and Beyond, resumes where Part 1 left off and continues to the present day. The evolution of the United States Navy’s aircraft carriers is again picked up and covers continued modifications to the ESSEX and MIDWAY class carriers and to the initial super carriers of the FORRESTAL CLASS. The follow-on super carriers of the KITTY HAWK, NIMITZ, and FORD classes are discussed to highlight the continued evolution required to handle the ever increasingly sophisticated jet aircraft that have achieved operational status.
Book Features:

The thirteen aircraft covered in Part 2 begin with the Chance Vought F-8 Crusader, the first Navy and Marine jet fighter able to routinely exceed supersonic speeds, and which brought U. S. Navy jet fighters on par in performance to their land-based counterparts. As with Part 1, the scope of this publication includes all Navy jet fighter designs that reached at least the flying prototype stage, so the F11F-1F Super Tiger, F5D Skylancer, and XF8U-3 Crusader III, each of which was developed from an existing aircraft design, are all covered. Also included is the F-111B, Secretary of Defense Robert McNamara’s vision of a be all, do all aircraft for both the Navy and the Air Force. It was a concept which, at that time, was simply not possible to achieve.

Of all the Navy and Marine jet fighters that became operational during the first ten years, only three, the F9F Panther, F2H Banshee, and F3D Skyknight, ever engaged in combat. But the world was changing, and all of the fighters covered here in Part 2 that became operational with fleet squadrons saw, and continue to see, plenty of combat around the world. The Navy and Marines have also operated three different types of jet fighters, as well as other types of aircraft, strictly in a training role, that of serving as adversary aircraft in dissimilar air combat training (DACT). These include the American built F-5E/F/N Tiger II and F-16 Fighting Falcon, and the Israeli F-21A Kfir. These fighters are also included in this publication.

As this book is published in 2020, the primary jet fighter for the U. S. Navy is the F/A-18E/F Super Hornet, and the F-35C is just beginning to enter the inventory with the Navy’s first fleet squadron being declared operational in 2019. Meanwhile F-35Bs are already serving in considerable numbers with the Marines as they replace both the AV-8B Harrier II and eventually some F/A-18 Hornets. These aircraft are covered in the final chapters, bringing the reader up to date on the newest multi-role jet fighters now serving in U. S. Naval and Marine Aviation.

Together, Jet Fighters of the U. S. Navy and Marine Corps, Part 1 and Part 2, cover every jet fighter that has been designed, built, and at least reached the flying prototype stage since the FH-1 Phantom first took to the air in 1945. The remarkable history of these aircraft, the problems faced, the solutions developed, and the successes achieved provide incredibly interesting reading for the aviation enthusiast. But it is not just about each individual aircraft that took to the air. Equally as important and fascinating are the multitude of engineering challenges, developing technologies, the ever-changing roles and requirements, and the tactics and strategies used in deploying these aircraft with their increasing capabilities as they fulfilled their roles in defending the national interests of the United States around the world.

MSRP:
Our Price: Sale: $21.99
Regular:
By Bert Kinzey and Rock Roszak; softbound; 114 pages Detail & Scale presents U. S. Navy and Marine Carrier-Based Aircraft of World War II, a unique look at all of the American carrier-based...

MSRP:
Our Price: Sale: $23.99
Regular:
Colors & Markings of the F-102 Delta Dagger is the second book in Detail & Scale¨«??s Digital Colors & Markings Series covering iconic military aircraft of the 20th Century. Between 1984 and...

MSRP:
Our Price: Sale: $23.99
Regular:
The Grumman F-14 Tomcat is considered by many to be the most iconic naval fighter aircraft of the latter half of the twentieth century. Colors & Markings of the F-14 Tomcat, Part 1:...

MSRP:
Our Price: Sale: $19.99
Regular:
By Bert Kinzey and Rock Roszak; softbound; 102 pages Features of Detail & Scale�??s first digital publication on the McDonnell F3H Demon include: - A complete Developmental History of the...

MSRP:
Our Price: Sale: $35.99
Regular:
1/144 is arguably the aircraft scales that has seen more growth in recent times, attracting a large number of followers, especially due to the high quality detail currently achieved by the...

MSRP:
Our Price: Sale: $21.99
Regular:
About the Book:Jet Fighters of the U. S. Navy and Marine Corps is a two-book series that describes the entire history of American Naval jet fighters, from the very beginning when many thought that...

MSRP:
Our Price: Sale: $39.49
Regular:
Book, soft cover, 144 pages with more than 600 images in full color. The First World War caused an advance in unprecedented weapons: the armored vehicle, the flamethrower, the tracer bullets, the...

MSRP:
Our Price: Sale: $19.99
Regular:
By Bert Kinzey and Rock Roszak; softbound; 102 pages About the Book: The Digital Detail & Scale Series continues with the newest title, SBD Dauntless in Detail & Scale, covering the ...

MSRP:
Our Price: Sale: $23.99
Regular:
Book Features: The book begins with a general description of the three major paint schemes applied to the Cougar during its history. The overall Gloss Sea Blue scheme had been in place since 1944...