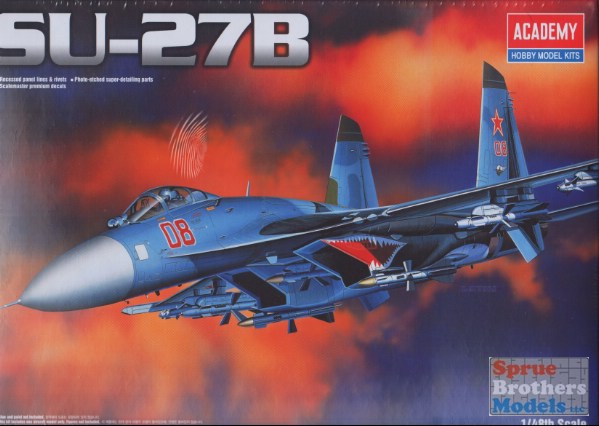 Much of the SU-27's performance must be credited to its superb AL-31F engines which are rated at 12,500Kg(27,550lb) thrust in after-burner stage. The engines which are easy to maintain and interchangeable between left and right, have a tremendous tolerance to several disturbed air flow.

It is this feature that allows the engines to run smoothly while the Flanker performs these unusual maneuvers. Unlike earlier short-lived Soviet jet engines, the AL-31F engines have a life of 3,000 hours based on 100 hour engine checks and 1,000 hour overhauls. This is fully comparable to the best the west can offer.

Armed with four R-73 AA-73 Archer missiles for short range combat and an array of R-27 IR-homing long range missiles, the SU-27 also carries the same internal GSh-30-1 30mm cannon used by the MIG-29, Firing at a rate of 1,500 rounds per minute, the cannon barrels only have a life expectancy of 80 seconds before they must be replaced.

The SU-27 Flanker, together with the MIG-29 give Russia air combat capability that is certainly equal to but most likely superior to that presently available to the west.

MSRP: $33.00
Our Price: Sale: $26.49
Regular:
When the AH-64A Apache entered production in 1983, the publicity releases described its mission as "Built to Fight, Designed to Survive".Until the Gulf War, the Apache had many critics who...

MSRP: $31.50
Our Price: Sale: $26.99
Regular:
History was forever made on October 5, 1944 when a Spitfire XIV of No.610 Squadron was the first Allied aircraft to shoot down a turbojet-powered Messerschmitt 262A Swallow!Designed as an...

MSRP: $35.50
Our Price: Sale: $30.49
Regular:
The most easily observable difference between the "A" and "D" versions are the larger avionics bays on both sides of the nose. These larger housings provide the room for much more sophisticated...