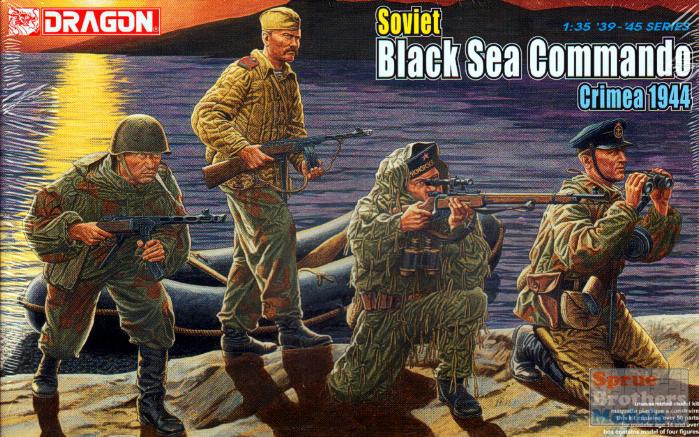 As the war progressed, German forces on the Eastern Front faced setback after setback. One such defeat was known as the Battle of Crimea, which took place between April 8 and May 12 1944. In this campaign the Red Army achieved total victory, cutting off the German 17.Armee and clearing enemy forces out of the Crimean Peninsular. The Soviets used amphibious landings to good effect, pushing Wermacht units back until Sevastopol eventually fell on May 9. A total of 97,000 German and Romanian soldiers were killed, wounded or captured in this battle. Dragon���s newest 1/35 figure set portrays four Soviet commandos from the Black Sea Fleet. In WWII, around 350,000 Red Navy sailors fought on land, often specializing in amphibious landings. This set depicts elite naval commandos in a unique set of uniforms and headgear. One of the commandos is even wearing the garb of a sniper. They also possess a variety of weapons ��� including the ubiquitous PPSh-41 submachine gun. Detail is sharp and the pose of each figure is realistic. This set proves that Soviet soldiers offer more variety than men riding on the backs of T-34 tanks or marching across the steppes in khaki-colored uniforms. This is a novel set, Dragon���s first of Soviet commandos, and yet its modeling possibilities are endless.