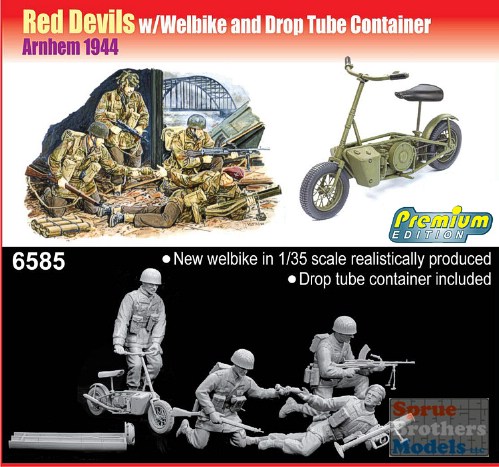 Features: - New welbike in 1/35 scale relistically produced - Drop tube container included The fierce fighting that took place in Arnhem during Operation Market Garden (17-25 September 1944) in WWII, will forever remain in the lore of the British ���Red Devils���. The entire 1st Airborne Division, about 10,000 strong, was earmarked to capture and hold Arnhem Bridge in Holland until the main Allied force reached them. Unfortunately, the main attack stalled, leaving the ���Red Devils��� to fight on unsupported. Paratroopers, some wielding only their fighting knives, continued to fight until the last radio message was broadcast: ���Out of ammo. God save the king!��� In the end, in an amazing feat of bravery, less than 1000 British paratroopers defended one end of the bridge against heavy enemy attacks for twice as long as was originally foreseen. This famous battle is commemorated in Dragon���s new 1/35 scale figure set entitled ���Red Devils w/Welbike Drop Tube Container (Arnhem 1944)���. The box contains a Premium Edition set, meaning it utilizes previously released figures. However, the exciting item has been enhanced with the inclusion of a new Welbike, a compact British-designed motorbike devised especially for covert operations. In actual fact, a total of 3853 Welbikes were produced in WWII, with many used in Operation Market Garden. The 1/35 scale model bike has been carefully reproduced in fine detail, and it constitutes a novel centerpiece for any vignette. The set includes four finely molded figures in combat poses, complete with a generous amount of personal equipment. It also associated parachute drop container. This famous battle in the history of the Parachute Regiment can now be recreated by modelers even more dramatically thanks to this figure set from Dragon.